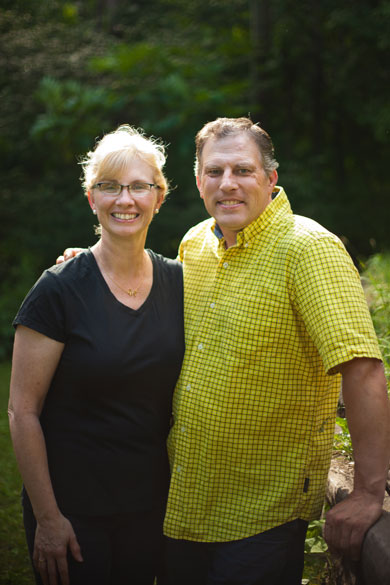 Randy is the third of 4 children born to Dick and Lois Klawitter, founders of TWFM. He first moved on to the property when Dick and Lois moved the family here in the mid 70’s. After graduating from Lutheran Bible Institute (LBI) and traveling the midwest singing as a trio made up of brother Rick and fellow graduate from LBI, Renee Westrom, Randy and Renee married in 1981. Renee has also served in countless ways here at TWFM over the years. Randy and Renee have raised their family of 4 children in the log home they built together from 1984 to 1988.

Randy has been involved in nearly every aspect of TWFM since it’s beginning. Building trails, planting trees, haying the land, fixing fences, mowing lawns, repairing and building machinery, maple syruping, putting in wells, working with the animals, clearing campsites, cutting firewood, building woodsplitters, grading roads, building the Fellowship Center, giving oversight to the beginning of the Prayer Cabin Village, managing the upgrades to the Maple Syrup system, burying fiber optic cable, plowing in lots of underground electric lines and water lines, etc, the list can go on and on. In 2001 Randy stepped into an even larger leadership role when the Board of Directors asked if he would take the helm of TWFM as Executive Director.

Greeting and seeing new guests into cabins is one of Randy’s great joys. As a licensed pastor he wears many different hats in his roles and responsibilities here. Being a “Pastor” to these people in a small way by praying for/with guests and sharing with them from what the Lord has shown him and ministering to their needs is surely one of Randy’s greatest, most fulfilling, and meaningful pleasures. Some even call him Rev-rand. One of Randy’s goals is to daily fulfill the call of God upon his life and also work to live out one statement he heard over and over again from his father, Dick. “I just want to be the man back stage who draws open the curtain so the drama of Jesus can unfold in someone else’s life.” Randy says,

“Witnessing the transformation in our guests when they leave here refreshed and having had an encounter with Jesus, is so rewarding and makes it all worth it.”

Randy’s greatest prayer requests for each day are for Wisdom from above; Provision in every way; and Protection, physically, spiritually, emotionally. Having seen the Lord’s manifest power for these now more than 40 years, Randy is confident of God’s power and goodness and believes “The Best Is Yet To Come!”